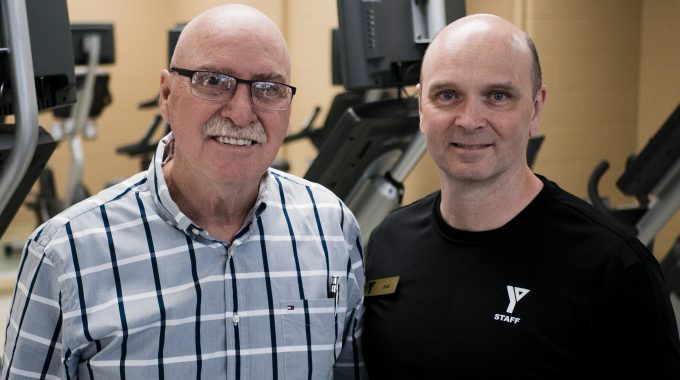 His wife always called him the healthiest guy she knows. But, two years ago, Spencer Potter had a heart attack and almost died. It started on the squash court, where he played in a squash league on a regular basis. “I was in the middle of a game when I started to feel pain in my chest. I stopped playing and a friend drove me home. When I got home, I sat on the couch with severe chest pains that wouldn’t go away. My wife immediately called 911 and by the time the paramedics got to my place, I was in cardiac arrest,” said Spencer.

The paramedics were able to revive Spencer before rushing him to Southlake Regional Health Centre in Newmarket, where they operated on him right away. “It all happened so fast,” said Spencer. “It was very frightening and came as a complete surprise. The paramedics and doctors at Southlake Regional Health Centre did an amazing job and I’m so thankful to them for saving my life.” About a year and a half after the heart attack and after Spencer’s medicine was adjusted to the right level, the doctors told him that he needed to gain strength and improve his fitness level in order to fully recover. That’s when he was introduced to the YMCA Healthy Hearts Program.

In partnership with Barrie’s Royal Victoria Regional Health Centre (RVH), the YMCA Healthy Hearts program is a 12-week strengthening cardiac rehabilitation program that is based on individual needs and goals. The program is designed to help people regain their strength, reduce and prevent the risk of cardiac episodes and improve their health and quality of life. “I attended the hour-long program twice a week. The instructor, Joel Seymour, is a big part of the program’s success. He measures your progress week to week and tailors each work out session to your capabilities. He’s like a personal trainer! It was excellent and it made me so strong. Before the program, after I’d walk my dog, I would come home and have to sit down on the couch. This program made a huge difference in my strength and overall energy level. My wife could also see the progress I was making throughout the program. She was so pleased to have the YMCA’s support,” said Spencer.

After completing the Healthy Hearts program at the Barrie Y, Spencer felt strong enough to enter the national squash championship in Toronto. “I wanted to do it this year because coming out of the Healthy Hearts program, I felt so strong, and you never know what the future holds. The support I received from my family and my YMCA friends was truly amazing,” said Spencer.

At the age of 70, Spencer doesn’t’ see himself slowing down. He’s a member of the Orillia YMCA and works out at least three times per week at the Orillia and Barrie Y. It’s a big part of his life now. “I am so thankful to the Healthy Hearts program for giving me the tools I needed to get strong and make a great recovery. I would recommend this program to anyone – it can change your life!”