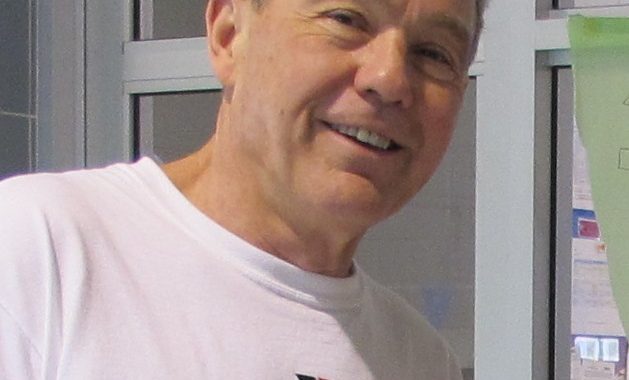 It all started when a little boy at the age of seven moved to South Africa. Larry was born Canadian but was raised in South Africa until he was 14 years old. The climate and topography in Africa was absolutely amazing. There were nice warm days and few cold nights. Larry was excited to start a new school but he did not know what to expect. As he started his first day he soon realized that everyone there had to play a sport. If he did not play a sport, then he would need a doctor’s certificate. If you were terrible at sports, you still also had to play. Larry discovered his passion when he joined a competitive swimming team.

Larry did not have a great experience in Africa. He was there for seven years and disliked the British school system very much. The school system used canes for discipline. The cane came out quite frequently. It was like being in a black and white movie, looking at the masters standing at the podium with their black drapes while all the kids sat there in little seats in front of them.

Larry ended up moving to London, Ontario, in 1964. When Larry moved there he didn’t know anybody; he came from a different culture. Larry went searching for a swim team in London. This is when he discovered the YMCA. They had a very good swim team there, which consisted of two Olympic swimmers on their team. This was more chance than it was plan. He walked into the YMCA swim team with no friends, but left on the first day with a lot of new good friends who shared his passion with him. The facility provided Larry a venue to meet others in his community. Larry loved this swim team because they had an amazing coach, who was a radiologist and became the medical doctor for the swimming team. He had trained hard to become a national swimmer. Larry became addicted to swimming and loved his swim team.

After finishing school in the spring time, at the age of 23, Larry became a young veterinarian. He didn’t have any money at the time so he trained and coached a kid’s swim team. This was also one of his passions. He liked to give the kids opportunity to exercise and grow from being active; Larry also began making a lot of new good friends like this. After saving up a bit of money, Larry opened up a veterinary hospital in London, Ontario. He owned this hospital for 20 years, then decided to sell it.

After some time of being part of the YMCA, Larry began to notice that 25 percent of the people who were involved there were given some financial assistance. Some of the people had complete funding taken care of while others had some of the cost paid for. He believes that getting children motivated means getting them into sports and physical fitness. His love of fitness is something he wants to pass on to them. He knew how much this would help the kids.

At the age of 16 in the year 1965, Larry became a camp counsellor for the YMCA. He had never done this before and was nervous and excited at the same time. The YMCA gave him a group of eight children, including four from Children’s Aid. Their cabin was different from all the other cabins at the camp. Larry ended up with the toughest kids. They were challenging; he didn’t know why he was given these kids being a new counsellor.  One night all the cabins got to do an overnight stay somewhere, but Larry’s cabin was not allowed to leave because the kids were so troubled. At the end of the summer though, Larry was able to turn this around and have fun with the kids.

Larry moved north to Penetanguishene in 2004 at the age of 57. He then began to attend the YMCA in Midland. He spent a great deal of his time there because he loved their pool so much. At this point in his life, swimming was a priority to him because he was still very competitive. He trained three times a week just for the sake of his own personal training.

Larry was training one day and a very good friend if his, Herb, was there. He saw Larry swimming and he asked him about one of his swimming strokes. Herb swims 14-20 laps every day but he also had the world’s worst stroke. He has a physical limitation but that does not stop him from doing 14 lengths non-stop. Larry looked at Herb and said:

Over the past few years Larry has been involved in the YMCA quite a bit. After eight years of swimming he realized that he was swimming anywhere from 8-12 kilometers a week with his good friend, Derek Pantlins. He ended up saying to Derek:

“Why don’t we try and swim around Canada?”

Larry and friends then decided to swim from one side of Canada to the other. They wanted to get as many people involved as possible. Larry thought that this would be a great opportunity to promote swimming as an exercise. They both loved swimming so much they decided they would donate a dollar for every kilometer that was swum in the pool. This got quite a few people involved and enthused.  Larry then started to mark down on a big map on the wall in the Midland YMCA the number of kilometers they were swimming. After eight years, they got a lot more support all the way across Canada. Larry decided they should circle Canada. They had raised nearly $55,000 that was all donated to The Strong Kids Campaign. The Strong Kids Campaign is a fundraiser to assist people who can’t afford to take part in YMCA activities. If you are a single mom or dad, or if you don’t make enough funds, the YMCA can bring these kids in to participate. The money that has been raised has helped out hundreds of families. Larry’s family and friends have been very supportive and have raised many thousands of dollars for the program.

A year and a half ago, the YMCA decided they would have a swimathon. The group suggested that the participants get a group together and come up with at least $250. This was not mandatory but just a suggestion. Some of the groups raised $1,500 while others didn’t quite make $250. A woman came in with her young boy and girl on the day of the swimathon and approached the sign-in table.

“Can anyone take part in the swimathon today?” the mother of the children asked.

“Yes, of course you can take part,” Anne Marie, his wife, replied.

“But what does it cost?” the mother asked.

The mother handed over two dollars to Larry. The little kids went in and started to swim. When the little boy started to swim he couldn’t even make it from one end to the other without almost drowning. Derek, Larry’s friend, was in the lane with the little boy swimming. They were just going up and down the lane without a vigorous plan. Everyone was just trying to put on as many kilometers as they could. The group was trying to get enough kilometers to go across the Arctic Circle on the map.

“This boy didn’t get halfway down the pool and he started to drown,” Derek says to Larry about the mother’s little boy.

“You have to keep an eye on him and lift the kid up,” Larry chuckled back to Derek.

Something about these children really touched Larry’s heart. The boy had so much enthusiasm; he never gave up. At the end of the swimathon the group arranged for reporters and news people to come and photograph them. Smack dab in the middle of the group were the two children with huge smiles on their faces.  Larry had made it possible for these kids to take part and this made it all worthwhile.

Larry is now 67 and in phenomenal shape. He is retired and has an amazing house that his daughter, Cassandra, designed on Georgian Bay. Larry is a beekeeper and owns ten hives. On an average year he makes about 700 pounds of honey but gives all of it away. It’s a hobby to him. He gives lots of the honey to the YMCA to sell and raise money for them. One year they made more than one thousand dollars. Larry still today is an active participant in the YMCA and has helped out a lot of people.