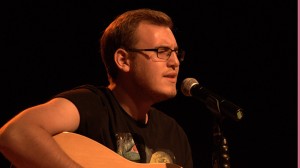 2014 Winner of Parry Sound’s Got Talent

Listen to his recordings at https://m.soundcloud.com/samuel-ladan

How did you get involved in music?

I’ve always been really involved in music. Since I was a kid I would listen to just about anything and to this day I still love listening to new kinds of music. I probably spend more time every day listening to music than I do watching TV or anything else and it’s never just background noise to me, I have to enjoy and think about it and see what makes it what it is.

I started playing guitar when I got a really cheap Spectrum guitar for Christmas about 4 years ago. I’ve never taken guitar lessons, I just taught myself by listening and figuring out where to put my fingers or I would look up tabs and chords online. I don’t even know how to read sheet music! I just make up chord progressions in my head and fit lyrics to the sound and rhythm of it.

How did you hear about Parry Sound’s Got Talent?

I first heard about Parry Sound’s Got Talent from a friend who already auditioned and mentioned I should give it a shot. I decided to try out when I mentioned it to my mom and brother and they really pushed me to go for it. What is really funny, is that they never heard me play and sing before the audition! They came to the audition with me and I think I really shocked them! They had no idea I could play or sing!

I also wanted to bring a different genre to the set of an otherwise over-pop-saturated event. I love punk music, and thought I would see how a crowd would respond to an acoustic version of new age punk!

Did the YMCA staff motivate you to take part in Parry Sound’s Got Talent?

The YMCA definitely motivated me in taking part at the event. After the audition the Y staff said I was amazing, which was really surprising to me, because I had never performed in front of a live audience before, just quietly in my basement. Every time I went to the gym after that, the staff kept telling me how excited they were to hear me play again. It was a good feeling.

How did you feel when you were announced as the winner of the talent contest?

I felt overwhelmed with a sense of accomplishment. I had just gone through a weirdly rough part of my life and was feeling really complacent since all my friends went to college and I was still in Parry Sound. So I think doing this and winning gave me a really huge jump start.

Has the YMCA impacted your life in any way?

Yes actually so much. Winning the talent show was one thing, but since I started working out at the Y, I lost about 40 pounds and it’s really changed my attitude in life. I feel great.

What are you plans for the future?

I’m not actively pursuing music right now, but I play music with a few of my friends who also play instruments and we have even thought of starting a band when things get settled with work and school. Other than that, I’m just working my way through my Bachelor of Journalism program at Humber College and hoping when the 4 years are up I can find a job reporting for Time Magazine or with VICE news. Those are both huge long shots, but they are my goals.